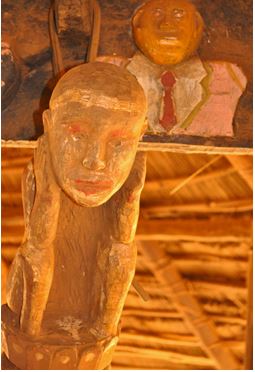 This paper discusses clauses of an oath taken in Kandon village, Sekong Province, Lao PDR. It called on the wild presences of the land to enforce death on people committing specific acts thought to be poorly regulated by existing law. The clauses in the original version of the oath addressed sorcery, witchcraft, theft and rape. As the men clustered around the village leadership to hear the final terms of the oath read aloud, the women waited around the perimeter. A dramatic debate between the men resulted in the clause forbidding rape being removed. This paper provides a close analysis of that debate, showing that those who wanted the clause removed based their arguments on the incompatibility of the oath clause with the existing arbitration and compensation payments traditionally imposed by the village leadership in the case of rape. The existing arbitration system assumed victims and perpetrators were known to one another and that they had established relationships whereby debts could be settled. By contrast, those who wanted the clause included in the oath imagined (or were thinking of real) scenarios where the perpetrator was unknowable and unaccountable to the victim and her family, and thus could not be addressed by traditional village arbitration or national law: injuries which would go unanswered without the oath. The debate can be read as a disagreement between two quite different outlooks on the social world, and thus as a reflection of the tensions in a village undergoing radical change. The  process of my researching the story behind the rape clause also indicates some of the difficulties in approaching rape as an anthropological subject.

Holly High is an anthropologist trained at Australian National University, she conducts fieldwork in Laos, and has held post-doctoral positions at Yale, Cambridge and Sydney universities. She is now an Associate Professor at The University of Sydney.