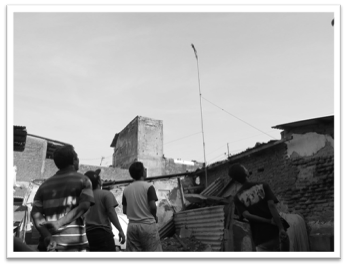 Abstract: Men race pigeons in low-income neighbourhoods of cities across the world. Yet, despite how widespread it is, pigeon racing has received scant attention in the scholarly literature, unlike bullfighting, dogfighting or cockfighting. Like the bullfight, dogfight or cockfight, however, the pigeon race provokes a strong representative association between the virility and determination of the animals and that of the men who train and engage them in contest. And, like the bullfight in particular, the pigeon race provokes a strong association between the virility of these men and their ability to domesticate wild animals in urban spaces. This paper seeks not to challenge these associations and their underlying troupe of masculinity as achieved through the control of wildness. Instead, it seeks to elaborate them in a different way by looking beyond the representational efficacy of the animal as symbol to the constitutive efficacy of the animal as an enabler of relationships between people in a city divided by race and class.

The pigeon highlights what Donna Haraway calls “sympoiesis”, or the de facto kin-making practices through which all things are “made with” others, be they animals, non-kin, denizens, citizens, or enemies. The training, keeping and racing of pigeons in the back-alleys of Indonesia’s second largest city, Surabaya, is an example of such practice. I point to the man-pigeon-ghetto triad that underpins such practice and argue that it is most instructively captured through the spatial concept of heterotopias, or mirrors that enable people to see beyond the space they are in to the space in which they desire to be. I hold that this desire (nafsu), and its more noble transformation into determination (semangat), has fuelled revolutionary sentiments in Surabaya’s low-income neighbourhoods (kampung) since the early 20th century and that those sentiments find their greatest expression in the pigeon as a potent figure of subversive mobility.

Bio: Robbie Peters is a senior lecturer in anthropology at Sydney University. His earlier work includes a book (Surabaya, 1945-2010) and journal articles on the political economy of violence in Indonesia and on gender and work in Jakarta, Surabaya and Saigon. His current research and publications tackle such issues as the politics of death and its commemoration in the Indonesian city; the on-demand motorbike taxi economy in Indonesia; and the effect of new cash transfers programs on Indonesia’s urban poor. He is working on a book about the Indonesian revolution and the city and has published in such journals as International Journal of Urban and Regional Research, Ethnos, Bijdraagen, City and Society, and Critical Asian Studies.