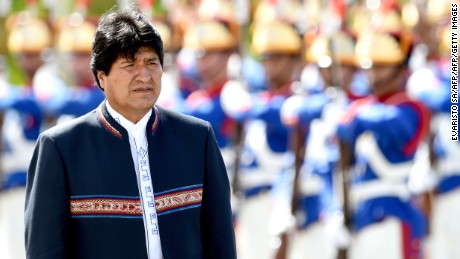 Anthropology Seminar | The Food That Will Feed the World: Energy Industrialization and the Politics of Productive Sovereignty in Bolivia

Since the inauguration of Evo Morales in 2006 as the country’s first self-identifying indigenous president at the head of the Movement to Socialism (MAS) party, Bolivia has passed through a trajectory of profound changes that have variously been described as revolutionary, reformist, ethnonationalist, and ideologically hybrid. More recently, the Bolivian government has embarked on an elaborate strategy to industrialize its significant energy resources under an official policy known as the “Patriotic Agenda 2025,” which projects Bolivia’s course of development over the midterm. The talk will describe both the plans for and initial findings of a new 4 year research project (2019-2023) that will focus on processes under the responsibility of the vice ministry charged with “advanced energy technologies,” which comprises two industries: lithium and nuclear energy. The overall aims of the research project are to (1) document ethnographically the implementation of energy industrialization in Bolivia as the main basis for its broader socioeconomic and political goals; (2) evaluate the underlying tensions in the country’s efforts to make “productive sovereignty” the ideological basis for national development; and, (3) contribute more generally to our knowledge of the implications of resource nationalism as an emergent and contested ideology of governance in the Global South.

Mark Goodale holds a chair at the University of Lausanne, where he is Professor of Cultural and Social Anthropology and Director of the Laboratory of Cultural and Social Anthropology (LACS). He is the author, editor, or coeditor of numerous books, including, most recently, A Revolution in Fragments: Traversing Scales of Justice, Ideology, and Practice in Bolivia (Duke UP, 2019), The Bolivia Reader: History, Culture, Politics (Duke UP, 2018), Letters to the Contrary: A Curated History of the UNESCO Human Rights Survey (Stanford UP, 2018), and Anthropology and Law (NYU Press, 2017). A co-winner of the 2017 International Geneva Award, he recently received a 4-year grant from the Swiss National Science Foundation to conduct new research in Bolivia on energy industrialization and economic alterity. In addition to his academic writing, his work has also appeared in more general outlets such as The Paris Review and Boston Review.