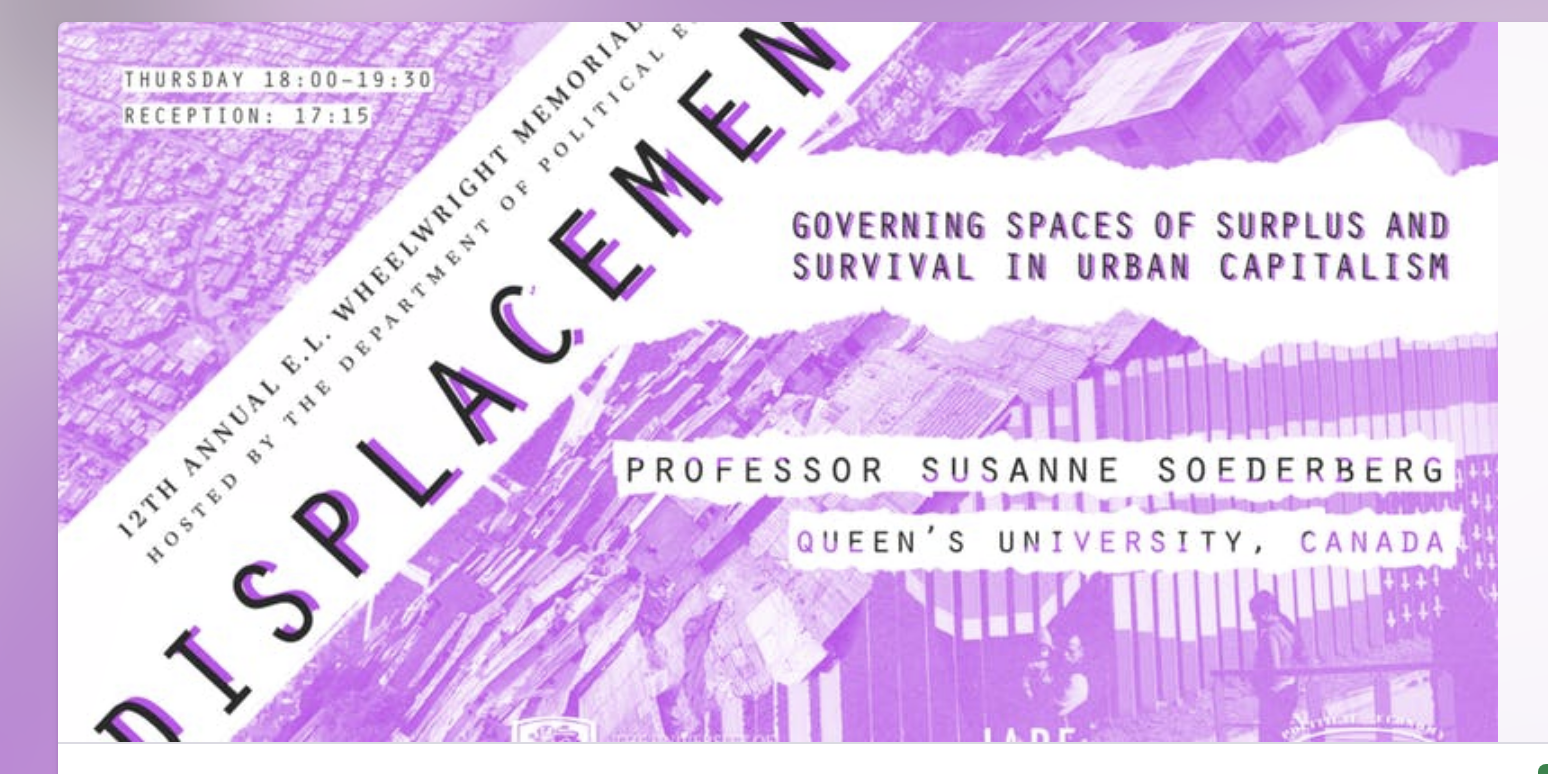 Displacements: Governing spaces of surplus and survival in urban capitalism

The scarcity of affordable rental housing has become a defining social issue with an increasing number of impoverished households embroiled in a vicious cycle of rental housing insecurity marked by over-indebtedness (rental arrears), evictions and homelessness. The latter has hit a crisis point in Europe, as more people – especially migrants, refugees, and single-parents – are being displaced from rental homes due to insufficient or irregular income. Poorer tenants often pay more than 40 per cent of their net disposable income on rent, which often leads to them cutting back on vital expenses such as food, heat and transportation.

To deconstruct this reality, guest speaker Professor Susanne Soederberg will go beyond dominant debates by treating low-income rental housing as a historical social relation, treating housing as a unique commodity in capitalism that provides a necessary place for the social reproduction of labour power, while being simultaneously integrated into the global dynamics of financial capitalism characterised by a continual pursuit of short-term, speculative gains.

This results in lucrative gains for a select minority yet leaving a majority to survive on a patchwork of monetised means including meager wages, expensive consumer credit, and inadequate social welfare payments. To engage the current dynamics reshaping rental housing as a place for the social reproduction of the working poor within financial capitalism, this public talk draws on an empirically grounded analysis of Berlin, Dublin and Vienna. It argues that historical and geographical configurations of monetised power, including landlords, employers, and inter-scalar state practices have served to reproduce rental housing insecurity and silence its gendered, class and racialised underpinnings.

The outcome is the everyday facilitation and normalisation of urban poverty and social marginalisation, on one side, and financial capitalism, on the other.

Susanne Soederberg is a Professor in the Department of Global Development Studies at Queen’s University in Kingston, Ontario Canada. Dr Soederberg’s research interests are broad and varied, ranging from global development finance, global governance, corporate power, debt, urban poverty, and state theory. She has investigated these themes across many geographical spaces across the global North and global South, including Latin America, Southeast Asia, North America and Europe. Among numerous scholarly publications and special issue editorships, Dr Soederberg has authored several books, including two award-winning monographs, Corporate Power in Contemporary Capitalism(2010) and Debtfare States and the Poverty Industry (2014). Through the generous financial support of the Social Science Humanities Research Council of Canada, Professor Soederberg is currently completing a book monograph on Urban Displacements: Governing Surplus and Survival in Global Capitalism(2019)from which her Wheelwright Lecture extensively draws.