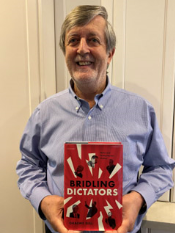 Due to the weather conditions this will be an online event only.

Abstract: The paradigm of studies of authoritarian political leadership is that personal dictatorship is characterised by a continuing dog-eat-dog struggle where members of the ruling clique are afraid of the untrammelled power of the dictator. Fear prevails because there is no security either for members of the ruling oligarchy or for the dictator; the former fears the dictator’s use of coercion against them, the latter that his colleagues will collude against him. But this picture of a Hobbesian state of nature at the summit of authoritarian regimes is false. In fact, most of the time, politics at this level is governed by rules. Based on a study of ten different regimes, this paper will outline some of the main rules and explain why such a focus is more useful than the focus on unbridled dictatorial power.

Bio: Graeme Gill taught in the Department from 1981 until his retirement in 2014. He has published on Soviet and Russian politics, democratisation, the role of class in political change, the development of the state, and authoritarian politics. He has been President of the International Council for Central and East European Studies and is a fellow of the Academy of Social Sciences in Australia.

Department of Government and International Relations