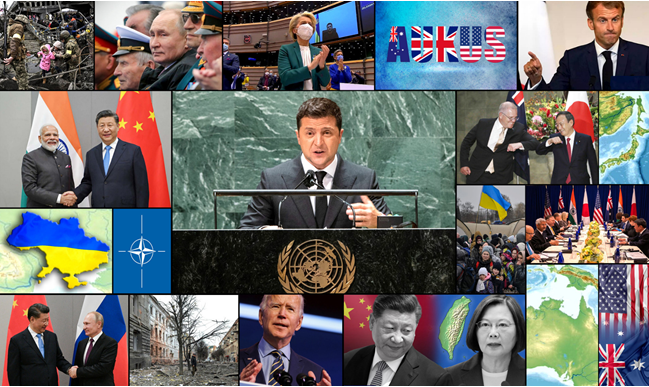 What does the Russo-Ukrainian war mean for Indo-Pacific security?

What does the Russo-Ukrainian war mean for Indo-Pacific security?

The Centre for International Security Studies presents the 2022 Global Forum, ‘What does the Russo-Ukrainian war mean for Indo-Pacific security?’.

Register to join via Zoom

Dr. Kristi Govella is deputy director of the Asia Program and senior fellow at The German Marshall Fund of the United States (GMF). Kristi is an expert on the intersection between economic and security policy in Asia, as well as on Japanese politics and foreign policy. Her research has examined topics such as economic statecraft, trade war, trade agreements, foreign investment, government-business relations, defense capacity building, regional institutional architecture, and the governance of the global commons.

Jingdong Yuan is an Associate Professor of International Security at the Department of Government and International Relations, University of Sydney. Dr Yuan specializes in Asia-Pacific security, Chinese defence and foreign policy, and global and regional arms control and non-proliferation issues.

Tong Zhao is a senior fellow in the Nuclear Policy Program at the Carnegie Endowment for International Peace, based in Beijing. His research focuses on strategic security issues, such as nuclear weapons policy, deterrence, arms control, nonproliferation, missile defense, hypersonic weapons, and China’s security and foreign policy.

About the CISS Global Forum
CISS Global Forums are designed to respond rapidly, analytically and critically to new and pressing issues of global security. As the world takes another turn, our 2022 Global Forum series explores ‘The New Geopolitics’. In 2021 the Global Forum explored ‘Friends, Enemies and Interests: Critical Perspectives on AUKUS’; in 2020 the ‘COVID Crisis’; in 2019 ‘Digital Insecurity’; and in 2018 ‘Peace and Security under Uncertainty’.

Visit the Centre for International Security (CISS) website for more information or subscribe to CISS events to always be the first to know what’s happening.